Each year more than 17 million patients in addition to 5 million users of day services and residential care are able to benefit from the services offered by Saiseikai. 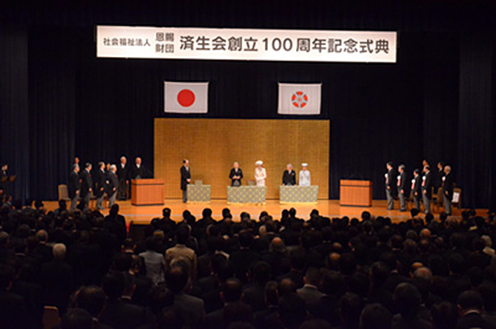 100th Anniversary Ceremony held with Their Majesties the Emperor and Empress in attendance(May 30,2011)

On February 11, 1911, Emperor Meiji summoned then-Prime Minister Taro Katsura and graciously donated 1.5 million yen together with an Imperial Rescript commanding the establishment of a foundation to minister to the medical needs of the poor.

With his commission from the Emperor, Prime Minister Katsura then collected contributions from both public and private benefactors, establishing the “Saiseikai” Imperial Gift Foundation on May 30, 1911.

For more than 100 years following its creation, Saiseikai has sustained its founding spirit of “Saisei,” or “Saving Lives,” overcoming challenges posed by ever-changing social and economic circumstances.
Throughout this time, it has continued to carry out activities and programs for the improvement and promotion of national health, medical services, and social welfare.

Saiseikai was designated a public medical institution in 1951 and, in the following year, was reorganized and officially renamed to Social Welfare Organization Saiseikai Imperial Gift Foundation, Inc.

At present, Saiseikai is governed under the leadership of Patron H.I.H. Prince Akishino, President Akito Arima and Director Shigeru Sumitani. Headquartered in Tokyo and featuring a wide-reaching network of branch offices in 40 of Japan’s 47 prefectures, Saiseikai aims to continue to grow its presence as a social welfare organization and public medical institution. It employs approximately 58,000 dedicated staff – each engaged in activities related to health, medical, and welfare services.
These staff members carry out their activities across Saiseikai’s 705 facilities and outreach programs,which include hospitals, health service facilities for the elderly, welfare institutions for the elderly and children, home-visit nursing care stations, and so on. More than 17 million patients in addition to 5 million users of day services and residential care are able to benefit from these services.

On May 30, 2011, Saiseikai was honored by the presence of Their Majesties the Emperor and Empress at its 100th anniversary celebration.

Entering the 21st century, Japan’s aging society has quickly grown to become a major issue, with Japan’s child population shrinking due to this quickly-expanding elderly population and the impacts such growth carries. Japan’s political, economic, and social dynamics are changing rapidly and we have reached a significant turning point whereby we must re-assess how health, welfare, and medical services should be addressed given Japan’s current situation.

At this critical turning point, Saiseikai is determined anew to make concerted efforts toward its next centennial anniversary – specifically, to carry out the three pillars of its mission in keeping with the spirit of “Saisei” that has been nurtured and strengthened by 100 years of history and tradition.

My most serious concern is that there are poor people without resources of their own who are unable to receive the medicines they need and so are prevented from living out their natural life span.
I therefore intend to open the way to saving their lives by providing them with medicines and treatment.
I shall donate my own funds to establish a foundation for this purpose.
I trust that you will heed my words well and take necessary measures to establish such a foundation on which needy people may rely forever.

Our Network in Japan